We all need to be reminded every once in a while to make the best choice.

Remember the Super Friend / Helping Hand chain that we restarted last week?  Look at it now! 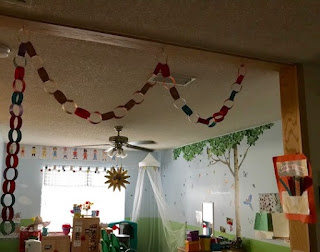 It is almost half way to the floor again - which means we will draw a paper out of the jar to see what we will get from some things that they have chosen.  Some ideas are:  outside day, park day, watch a movie, pizza for lunch.  These are some of the ideas they have suggested they would like when it reaches the floor again.  😀 Small price to pay for good choices!  We are seeing many more good choices and Super Friends over all.  Are there still things we need to tweak?  Sure!  But I love to see more engagement, more participation, and being kinder to friends and teachers, and completing tasks with less behavior distractions.  It makes our day go much smoother.  On my end, I have to remember to use my visuals, remind of the schedule so they can see they will get to the part they want eventually, and many first-then statements, and sometimes first-then visuals.  I realized I had forgotten to use them ever day.  I needed a refresher as well! What happens is things will go so smoothly after using the visuals for a while that you don't need them anymore.  Then they forget about them as well, and then they are needed.  Just hit the "refresh" button and start over.

We had more gingerbread fun today, and Jingle Bell fun as well.  Papa Joe had them all super excited and participating very well reading the Jingle Bell book.  Then he had to calm them down a little so they could work in some centers before going outside.  😆 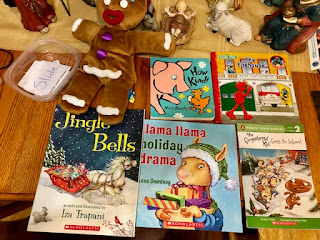 For centers we used some of the centers we have been using - Gingerbread girls and houses alphabet match, Gingerbread boy alphabet match, and feeling face gingerbreads but with different manipulatives for counting.  We also included the sand textured upper and lower case alphabet, and  Unlock It! Number Match (Lakeshore) for a different number fun.  Love these locks.  They enjoy counting the starts to match the numbered key with the lock, and they can read the number word on the opposite side of the lock. 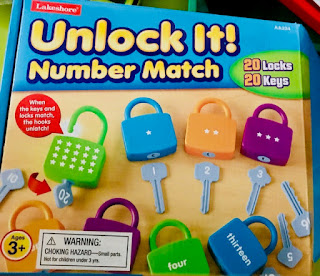 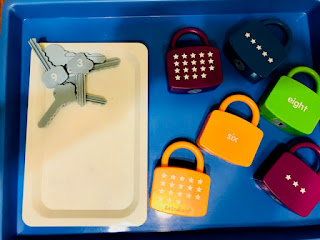 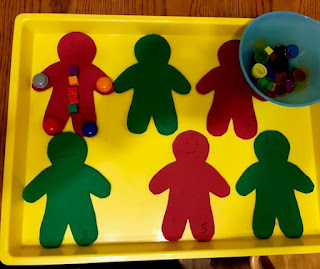 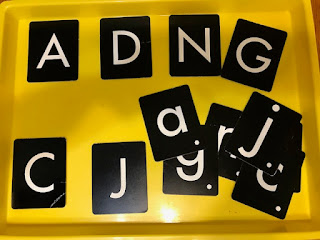 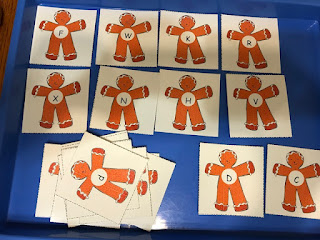 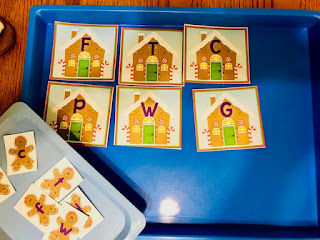 The children had a few minutes before going outside so they grabbed some gloves and a few letters and played toss with each other saying the letter, and the sound for the letter before tossing it in their friend's direction. 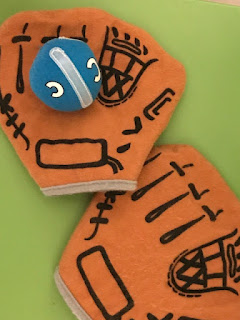 While the VPK children were doing centers, and the one three year old joined in a little bit, the one and twos enjoyed some play/learning time in the playroom.  After reading a few books, we worked on matching and identifying colors and shapes as we cleaned up from baby exploration.  The baby typically sleeps while VPK centers are happening.  Then we had a few minutes to play with our cakes, and we were off to outside! Younger children books today were:

I love that now the younger children are joining in when we read "Run, Run, as fast as you can.  You can't catch me I'm the gingerbread man.
The VPK Group had a great Jingle Bell band going on outside, most children were playing instruments, but one child was using the instrument as a microphone.  Look for this band about 15 years from now. 🥁📯🎤  They also rode trikes and gave rides with the trailer, and pulled children in the 3 car wagon.  Some of the younger children very gently rode the alligator teeter totter with our new little friend as she was learning how the teeter totter works.  There was tons of dirt/mulch moving going on with the big trucks.  They played tag, chase, kick the balls (I would say soccer but they just aren't there yet 😏), and tossed the balls. 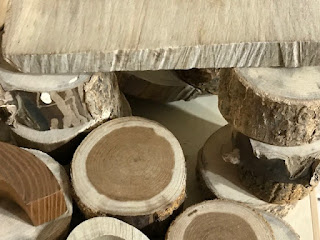 Some of the children built with little nature blocks, and some children worked in the sandbox sifting and scooping.  After outside time we went in for some yummy lunch.  Most of the children really loved the lunch.