Today was not exactly a typical day.  After breakfast the VPK children went into the VPK room and reviewed their homework and chose a treasure from the treasure box.  While they were doing that, the younger children were coloring a little table setting page to laminate for their placemat at our Thanksgiving / Friendsgiving Lunch.  The VPK children colored one to be laminated after their treasure box prizes. While they played we took turns making a little rhinestone leaf that we purchased from Oriental Trading. The only thing really noteworthy about it was that we used fine motor skills to try to squeeze the glue (tacky glue so needed teacher help) and to place the little rhinestones on the foam leaf.  It was cute and the children really enjoyed making them.  While they were playing in the playroom they tended to gravitate to the home-living area.  I noticed that they were serving fruits and vegetables using the color sorting foods.  They do enjoy their fruits and vegetables for the most part.  Probably because we serve so much fresh fruits and veggies here because we are in the Fruit and Vegetable Co-op.  They also had a fantastic time doctoring or caring for dogs and baby dolls and playing with the little people in the little people house and bus.  The waffle blocks were another favorite today.  The babies are really enjoying the new toy that was put in yesterday for them to walk around, put balls in, and play with.  It really cut down on the climbing on furniture and standing, which was my goal for adding that toy. 😀  After play time and making crafts, we read stories and sang a song or two. 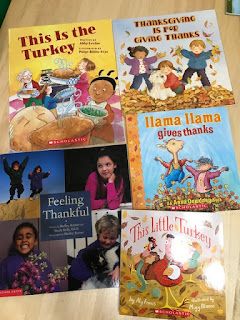 Then the children had about 30 minutes of play time outside.  I don't believe they did centers today, but mostly ran around and expended all that sweet energy that small children have.  They came in ready to eat turkey and veggies and fruit.  We had an abundance of food today thanks to the food brought in by parents today.  We had corn casserole, fruit salad, mixed vegetables and mashed potatoes brought in today, then we had cooked sweet potatoes in the smaller crockpot and the turkey in the large 8 quart crockpot, and had rolls and pumpkin pie and apple pie.  The turkey barely fit in the large crockpot.  I had never made one in the crockpot before; wow was it moist!  Definitely recommend making a turkey in the crockpot!

One of the goals of our Thanksgiving Lunch is to prepare them for the manners necessary for the official Thanksgiving meal on Thanksgiving day.  Children can be overwhelmed with large groups of people especially if they don't know what is expected of them.  Things that we reviewed today were: where to put your fork and spoon, where to put your cup, to use your napkin, and how to ask nicely for food or drink. Thankfully the group of children we have is pretty good already with knowing what is expected at lunch time.  The main trouble we have, generally, is volume control.  It is like it is a dial that keeps turning higher, you turn it down for a second and then up it goes again.  We have been using a visual with a Lion for Loud outside voice, a Turtle for Talking Turtles inside voice, and a Fish for Fishy Quiet like rest time.  I believe we got the visual from Program Wide Positive Behavior Support. 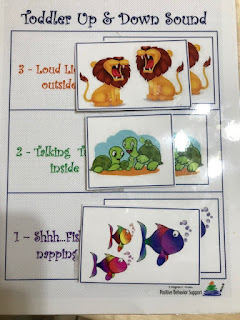 Today "J" removed the Talking Turtle pictures to show his friends many times - to no avail. 😕 but he kept trying until we told him to just leave it. They were really excited to have Thanksgiving / Friendsgiving feast.  To make it more special we used stoneware plates instead of plastic plates.  They are breakable but not china. (I'm not that crazy!) They all ate very well and kept the plates on their placemats, not breaking even one plate!

After lunch and rest time the children had peanut butter sandwiches and pumpkin pie and apple pie which most of them loved.  So happy to make things that they enjoy. 😇

Someone had asked me for the recipe for the Sweet Potatoes in the Crockpot.  I made them per the recipe but with just a little marshmallows.  I think it may have been ok without the marshmallows, just wasn't sure.  Here is a link to the recipe.  Sweet Potato recipe
Here is another Sweet Potato crock pot recipe that looks a tad healthier. Healthy Sweet Potato Crock Pot  Either way it saves oven space and stress at the time of the meal.  A win-win in my book!